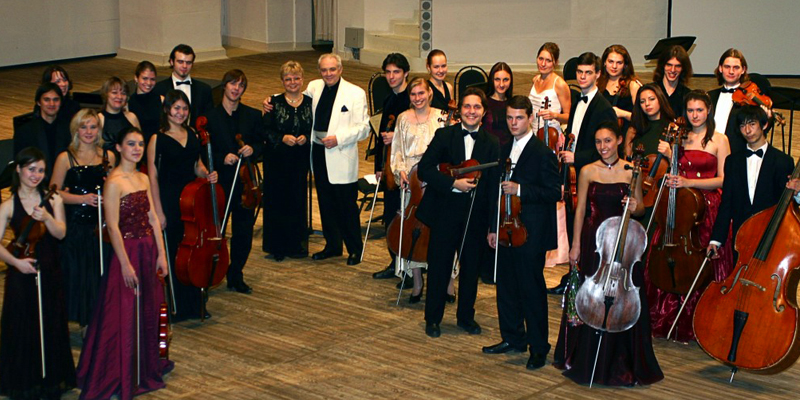 People’s Artist of the USSR
Professor

“Sound of “Moscovia” Orchestra is identical to outstanding chamber orchestras of the World, and due to integrating influence of E. Grach their performance produced tremendous impression. Following the  hypnotizing fascinating hand moving of E. Grach, the Orchestra sounded originally, brightly and dynamic”.

“During half an hour the guests of the Municipal Nikosia Theatre acclaimed for the young virtuosos of the Orchestra, who impressed everybody with their mastery. The first performance of Moscow musicians at European Limassol Festival (with assistance of the Russian Center of Science and Culture) became a really great event in Cyprus cultural life. The amazing performance of young talented musicians (…) turned the world famous orchestra show into a great artistic occasion.”

A reviewer of a Cyprus newspaper

“The Orchestra won the audience at the Great Hall of the Moscow Conservatory with its harmonious ensemble performance, full of youthful ardour and enthusiasm…” “alumnus of an outstanding musician – the Chamber Orchestra “Moscovia” fully meet the highly professional violin mastery school of E. Grach.”.

“It goes without saying, that regardless of the musicians’ youth, the Orchestra is now one of the most venerable chamber ensembles”.

The “Moscovia” Orchestra and the conductor E. Grach presented “String Serenade” by P .I. Tchaikovsky in inspired and confessional manner. The 12 violinists sounded so powerful and strong, as if it were a whole Symphonic Orchestra. The wonderful waltz was performed with charming tenderness. Eduard Gratch and his orchestra’s interpretation of “Carmen-Suite” by Bise-Shchedrin is the performing masterpiece. With his unique talent, the conductor and his orchestra  perform the symphonic equivalent of the great Biset’s opera, make us “see” its characters and suffer their tragedy together with them. The impression is unforgettable!!!”

All these comments of Russian and foreign press reflect the impression made by the “Moscovia” Orchestra on the audience. The Chamber Orchestra created in 1990 on the basis of the conservatory class by the outstanding violinist, Professor of the Moscow conservatory, National Artist of the USSR Eduard Grach, gained a great popularity in Russia and abroad. High professionalism and vivid perception of life, a romantic impulse and masterly coordination, beauty of a sound and ensemble purity, improvisational freedom and constant search for something new define the creative image of Eduard Grach and his pupils — musicians-adherents of “Moskovia”.

The first performance of “Moskovia” has taken place at the concert dedicated to A. I. Yampolsky’s 100th anniversary. The Ensemble is unique for many reasons. It is not only the ensemble of soloists where each member is a winner of a music competition. The Ensemble is also unique because it fully consists of the E. Grach’s pupils. Therefore, balance and naturalness of sound, absolute mutual understanding of the conductor and orchestral players and unity of a performing manner have amazed listeners already at first concerts of “Moskovia”. The Ensemble consists of more than 25 musicians. Several soloists of the Orchestra taking part in concert programme change each other’s accompanying roles, which is an extremely rare phenomenon in the performing art.

Nowadays the orchestra has taken a worthy place among the best chamber collectives. Its repertoire comprises different styles and genres — Vivaldi, Bach, Haydn, Handel, Mozart, Beethoven, Brahms, Mendelssohn, Grieg, Tchaikovsky, Shostakovich, Schnittke, Kreisler, Sarasate; concert miniatures by Gade and Andersen, Chaplin and Piazzolla, Waxman and Ludwig, Kern and Joplin, arrangements and transpositions of other composers. “Moskovia” successfully performs in Russia and abroad (Poland, Germany, Greece, Cyprus, China, France, Vietnam, Croatia, Serbia, Macedonia, Egypt, Italy, Estonia, Ukraine etc.). The orchestra represented its skills in St.-Petersburg, Tula, Penza, Orel, Murmansk and other cities of Russia, participated in festival “White nights” in Arkhangelsk and annually participates at the M.Glinka Festival in Smolensk. Concerts of the orchestra of E. Grach at the “Russian winter”, “Moscow Stars” Festivals were the real events in the musical life of Moscow. Annual philharmonic subscriptions — “E. Grach plays and conducts” (Grand Hall) and “E. Grach and his pupils” (Small Hall) — are one of the most popular programmes. The Russian TV pictured several concert programmes of the orchestra which have been included into films “With love to music”, “Eduard Grach — benefit performance from the Grand Hall of the Conservatory”, “Flow of Life” and others. Each concert of “Moskovia” gives us pleasure to enjoy the free music playing produced by the Teacher and his Pupils who became partners of the master.