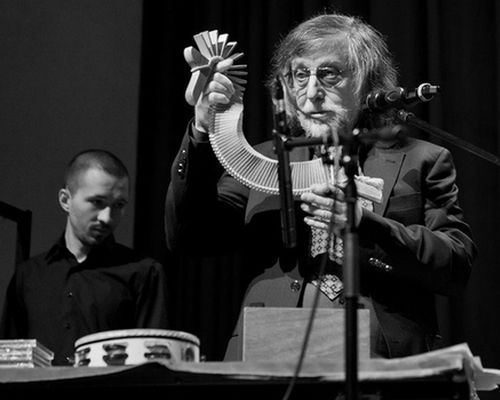 Mark Pekarsky was the first in Russia who organized the “Percussion Instruments Ensemble”, the only concerting Ensemble since 1976 till now.

The Ensemble’s debut took place in the Moscow Scientists’ House on December 6th, 1976 and was met by press and public with delight. Since then the “Percussion Instruments Ensemble” plays in Russia and abroad with permanent success, participates in large festivals, has recordings on radio and TV, phonograph records and compact discs.

In 1990 – 1992 the Ensemble was the regular collective of All-Union Tour Concert Association “Soyuzkontsert” of the USSR Ministry of Culture. The Ensemble’s debut in 1986 at the 36th Berlin Festival “Berliner Festwochen” was really triumphal. Newspaper “Tagesspiegel” called the Ensemble “The catalyst of Soviet composers’ creativity”, and recognized it as an “east competitor” of the famous percussion ensemble in Europe “Les Percussions de Strasbourg”. “Their comparison with the famous “Les Percussions de Strasbourg” is not an exaggeration, — commented the Swiss newspaper “Neue Züriche Zeutung”. — Unreal accuracy and teamwork, easy handling with really uncountable toolkit, and there is also an ability to stylistic transformation! It is clear now, why Russian composers are eager to work with Pekarsky’s Ensemble”.

“Can music keep the spectators’ attention within the whole evening? — Perhaps, it can, if we speak about such a brilliant group as Mark Pekarsky’s Moscow Ensemble”, writes the reviewer of Berliner Morgenpost (Germany) newspaper. The listeners of Pekarsky’s Ensemble gladly share his opinion.

Mark Pekarsky’s Moscow Ensemble is the participant of many ceremonies, such as opening of art exhibitions in the Pushkin Fine Arts State Museum, in the State Tretyakov Gallery, in the Central Artists’ House on the Krymsky Val and others, opening of the international film festivals in Moscow and Sochi, opening of sports competitions, including the Judo Championship in St.-Petersburg, Awarding Procedure of “Golden Mask”, “Golden Eagle”, “Crystal Turandot”.

Each Pekarsky’s Ensemble performance is considered as significant event of a modern cultural life and each time their programmes includes a premiere of a new composition or a debut of a young composer.

Working on the concert programmes of the Ensemble has turned to the original dramatized actions. “You think, that there are four elements of music, aren’t there? Melody, harmony, rhythm and timbre? It is wrong! There are five of them as demonstrated Mark Pekarsky … You should add theatre!” — Glasgow Gerald (Scotland).

Members of the Ensemble

Andrey Doynikov (born 1981) is one of the most outstanding Moscow Conservatory graduates. His manner of playing is distinguished by extraordinary flexibility, delicate lyricism and perfection of performing art.
A. Doynikov went into music at the age of 6. He finished Gnesin Music School with honors (classes of Percussion and Piano). After that the musician entered the Percussion class named after M. I. Pekarsky of Historical and Contemporary Performance Department, the Moscow Conservatory. At the same time A. Doynikov entered the Piano class of Professor V. M. Tropp at  the Gnesin Academy of music, and graduated in 2004 (nowadays the musician continues his musical education as a post graduate student of the Academy).
At the age of 15 ??? A. Doynikov became the First Prize laureate at the International “Classica Nova” Competition in Hanover (Germany), and a year later he became a winner of “Simphonia” Youth Competition in Volgograd. The following year the musician had a success at his first “adult” competition. It was the IV International Competition of Percussion Players in Brno (Czech Republic). A. Doynikov became the first Russian laureate of a European competition, and got the Prize for the most interesting musical interpretation.
As a soloist A. Doynikov has performed in Germany, USA, Japan, Spain, Portugal, and Greece. He constantly gives solo concerts: Riga (Latvia) — 1999, Saint Petersburg — 1999, 2000, Moscow — 2000.
The musician released his first solo CD in collaboration with “Gnesin Virtuoso” orchestra. The recent works of the musician were in collaboration with his pedagogue Mark Pekarsky (season 2004 – 2005), and his participation in performances of “Mark Pekarsky Percussion Ensemble” in Siberia, the project of Russian Performing Art Foundation.
Since 1996 A. Doynikov  performed a lot in Russia and abroad (USA, Germany, Austria, Japan, Spain, Greece, Cyprus, Czech Republic, Latvia, Portugal, Great Britain and others). The musician performed also with several ensembles, and took part in the projects of such musicians as Y. Bashmet, ?. Lubimov, ?. Pekarsky.
?. Doynikov represents an absolutely new sort of a solo percussionist. As a rule, a percussion player is limited by traditional solo repertoire and has to perform mostly the compositions by the XX century composers. The other way is to play just entertaining music. A. Doynikov combines standard percussion compositions (music by I. Xenakis, K. Stockhausen, etc.) with solo violin music of different time periods (romanticism, baroque). Doynikov’s interpretation of violin music played by marimba and xylophone can easily compete famous violin players’ interpretation in its depth and mastery.
Doynikov is a scholar of “New Names” Charity Foundation, Vladimir Spivakov International Charity Foundation, and Moscow Culture Committee. In January 2001 A Doynikov was honored by the Youth Grant of the “Triumph” Foundation, and in 2003 he became a scholar of Russian Arts Foundation. In 2000 he was a participant of summer seminars in Trstenica (Czech Republic). The musician is also a laureate of M. Rostropovich Foundation (2004).
A. Doynikov is not only a performer, but also a composer. He has written music for more than ten TV films.

Andrey Vinnitsky (born 1980) was educated at Lyceum under the Conservatory of Rostov-on-Don named after S. V. Rachmaninov, class of Percussion. In 1993 he became a laureate of All-Russia Percussion Performers Competition, and in 1998 he won the First prize at the International Youth “Simphonia” Competition in Volgograd together with A. Doynikov.

In 1998 the musician entered the Percussion class named after M. I. Pekarsky of Historical and Contemporary Performance Department, the Moscow Conservatory. After graduation in 2002 he continued his musical education under M. I. Pekarsky as a post graduate student of Contemporary Music Chair, being a soloist of “Studio for New Music”. A. Vinnitsky performed as a soloist and as a member of several ensembles in USA, Great Britain, France, Germany, Portugal, Holland, Czech Republic, Latvia and different cities of Russia. In 2000 Vinnitsky was a participant of summer seminars in Trstenica (Czech Republic).

Dmitry Shchyolkin (born 1979) has a unique musical gift and implements it in a very unconventional manner. As most of his young colleagues, he began his career in Symphony Orchestra. Very soon D. Shcholkin devoted himself to solo and chamber performance. His repertoire comprises not only contemporary, but also old music. As for contemporary music, he successfully performs the traditional solo repertoire. In old music D. Shcholkin tries to find his own non-traditional way, which is considerably different from authentic dogmas.
With modern instruments of the ??-XXI centuries — marimba and vibraphone — D. Shcholkin interferes into the Renaissance and Classicism music, which was earlier performed only by Baroque “authentists” playing harpsichord and lute. Nowadays the musician can easily enter into competition with these performers. His interpretations are always inventive and delicate, but at the same time they are carefully thought over and historically based.
Alongside his solo performing, D. Shcholkin collaborates with ensembles playing contemporary and old music. Among them — Pratum Integrum, Studio for New Music, Musica Viva, The Pocket Symphony.
D. Shcholkin finished Central Music School of Moscow Tchaikovsky State Conservatory, class of Percussion. In 2002 he graduated from the Moscow Conservatory, class of Wood-wind and Percussion under M. I. Pekarsky with honors. Now D. Shchyolkin is a post graduate student of the Moscow Conservatory and he is writing a thesis “Percussion in the Middle Ages and the Renaissance Music”.
The musician took part in various musical festivals in Moscow, Saint Petersburg and other cities of Russia, Latvia, Czech Republic, Spain, Belgium and in festivals “Pekarsky-Percussion Days” in Moscow. As a member of Mark Pekarsky’s ensemble D. Shcholkin went on tour to the cities of Siberia in the project of Russian Performing Art Foundation. D. Shcholkin is also a winner of Performers’ Competition in Kazan (1999). In 2000 he was a participant of summer seminars in Trstenica (Czech Republic).

Dmitry Vlasik (born 1981) went into music when he was 7. In 1995 he finished Children’s Music School named after L. van Beethoven, class of piano. His life is full of interesting events. In 1998, after his moving to Canada, he graduated from Dousson College in Montreal with “Social Psychology” specialty. However, the attraction to music made him take private Jazz lessons.
While one of his visits to Moscow D. Vlasik met M. Pekarsky. After that Vlasik went into Percussion. In 2001 D. Vlasik came back to Moscow and entered Moscow Music School named after Gnesin, Percussion class of M. Pekarsky.
During two years D. Vlasik has got the necessary knowledge in musicology and playing new instruments, such as marimba and multi-percussion.  After graduation from Gnesin Music School in 2003 as an external student, D. Vlasik entered the Percussion class named after M. I. Pekarsky of Historical and Contemporary Performance Department, the Moscow Conservatory.  Now he is still the student of the department.
The musician performs a lot, playing chamber music, and he is also a member of Marimbophonists’ Duet (A. Doynikov — D. Vlasik).  He has already performed numerous premiers with diverse musical collectives, soloists and his fellow-students.
As a soloist, D. Vlasik took part in the II International Festival “Pekarsky-Percussion Days” in Moscow (2003), in “Moscow Autumn” Festivals (2003, 2004, 2005), in the Annual Bryansk N. Roslavets and N. Gabo Festival (2002, 2004), festivals in Lipetsk, Krasnodar and other Russian cities. In 2000 he was a participant of summer seminars in Trstenica (Czech Republic).

Anton Vashukov (born 1985) began playing percussion in Severo-Dvinsk. Soon he continued his education at the Arts College in Petrozavodsk. After finishing the college, A. Vashukov became a student of Percussion class, Petrozavodsk State Conservatory. In 2005 he entered the class of Wood-wind and Percussion under M. I. Pekarsky of Contemporary Performance Department, the Moscow Conservatory. Nowadays he is still the student of the department.