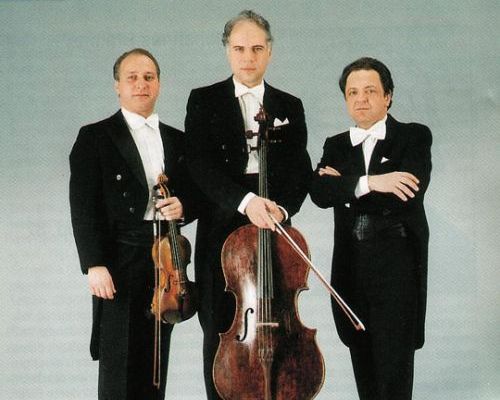 The “Moscow Piano Trio Ensemble” is considered one of the World’s main chamber ensembles. The soloists of the collective are People’s Artists of Russia; they are Alexander Bonduryansky (piano), Vladimir Ivanov (violin), and Mikhail Utkin (cello).

All the three musicians have got excellent education in ensemble mastery under Prof. T. A. Gaidamovich. They have a vast solo repertoire, and give numerous concerts as soloists or accompanied by orchestras in Russia and abroad.

The repertoire of the ensemble comprises more than 200 compositions, numerous classical programmes. The following cycles are notable: “Piano Trios of Russian Composers”, “Genre History”, “Piano Trios of Romanticism Epoch”, “All Beethoven’s Compositions”, and also monographs dedicated to W. A. Mozart, F. Schubert, F. Mendelssohn, J. Brahms, S. Rachmaninov and D. Shostakovich. In concerts of the “Moscow Trio» accompanied by symphonic orchestras the Triple Concerts of the following composers are performed: L. van Beethoven, A. Casella, B. Martin, N. Cherepnin, S. Berinsky, A. Tchaikovsky and A. Nikolaev. Concerts of the tree latter composers are inspired by the ensemble, dedicated to it and premierely  performed in the Great Hall of the Moscow conservatory.

The activity of the Trio attracts modern composers’ attention to the ensemble. Numerous works of such composers as Tchaikovsky, Tchulaki, E. Lazarev, I. Golubev, Y. Butsko, V. Grokhovsky, a Finnish composer P.-H. Nordgren, Friedmann from France, are dedicated to The “Moscow Piano Trio Ensemble”. Many Russian and foreign composers have entrusted the Trio with the first performances of their works.

The musicians perform not only compositions for trio at their concerts. They frequently collaborated with such musicians as: vocalists Nesterenko and G. Pisarenko, American singer J. Kaufmann, viola players Y. Bashmet,  Bobrovsky and  Tolpygo, clarinetists V. Sokolov and  R. Bagdasaryan, contrabassist R. Gabdullin.

The Trio was on tours not only in 300 cities of the former USSR, but also in 45 other countries of the world — from Argentina to Japan and from Norway to Egypt. Its performing art was met  with a great success in such halls as Concertgebouw in Amsterdam, Wigmore Hall in London, Auditorio Nacional in Madrid, Alte Oper in Frankfurt, Teatro Municipal in Rio de Janeiro, Teatro Colon in Buenos Aires, Merkin Concert Hall in New York, in the best concert halls of Moscow and St. Petersburg. The ensemble took part in prestigious festivals in Helsinki, Belgrad, Florence, Prague, Berlin, Dubrovnik, Ludwigsburg, Sofia, St. Petersburg and Moscow. The concert of the Ensemble in the Ohrid Festival, Macedonia was acknowledged as the best concert of 1994.

The musicians of the ensemble give numerous master-classes and seminars in Russia and abroad. One of the German newspapers published the following review: “… Three musicians, pedagogues of the Moscow Conservatory, turned the days of the Courses into unforgetable ones for all the participants, due to their artistic charm and the power of the pedagogical persuasion”.

The Moscow Trio has released a number of records with “Melodia” company in Russia, and later on they made CD records with German, French and American companies.

The work of the ensemble was highly appreciated in Russia — the musicians were honored by  statuses of People’s Artists of Russia, got the Moscow Prize in  Literature and Art, and “Muzikalnoje Obozrenie” newspaper called them “the  Best Ensemble of 1997”.