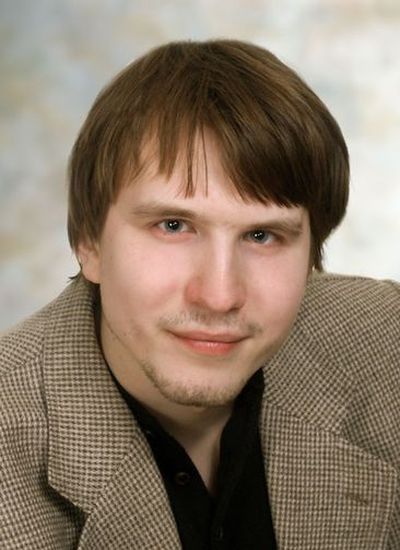 He graduated from Moscow Conservatory and its post graduate classes as a composer (professor Vladimir Tarnopolski). Khrust attended Summer Courses for New Music in Darmstadt (twice), Impuls courses in Graz and many master-classes with well-known composers (such as Beat Furrer and Georg Friedrich Haas) and performers. He was chosen for being a student of the Eighth International Young Composers Academy in the City of Tchaikovsky, the Perm Region (2018).

Khrust was a composer-in-residence at the electroacoustic centres GRAME (Lyon) and CIRM (Nice).

Nikolay was a co-author of the collective musical theater project ‘Boxing Pushkin’ (directed by Andrea Boll); the performance was shown in five cities, including Amsterdam (Muziekgebouw) and the Hague (the Korzo Theater).

In 2013–2014, the Meyerhold Centre Moscow staged Creation of the World, a sound mystery by N. Anastasieva, N. Khrust and A. Koleychuk, where Khrust was both a composer and one of the scriptwriters. It was totally shown eight times (choreography by M. Nagaychuk-El’Abdallah, art objects by V. Koleychuk).

Nikolay Khrust is an author and co-author of multimedia and multi-art projects. Sound installations made by Khrust in collaboration with Anna Koleychuk, Vyacheslav Koleychuk and Dmitry Kawarga were presented in Moscow, Zagreb, Heidelberg, Granada, Linz (the last work is a sound-light ‘eternal’ algorithmic composition commissioned by Garage Museum for Vyacheslav Koleychuk’s Atom public installation).

Nikolay appears as an electronics performer, improviser and computer music designer: he is a co-founder of the Octopus improvisation ensemble and plays on various Moscow and St. Petersburg stages from clubs to the Composers’ Union and the Radio Kultura broadcasting. Khrust realized several world and Russian premieres (for ex., RP of Das Atmende Klarsein by Luigi Nono; Moscow Forum festival, 2011). As a computer music designer and performer, he worked with such musicians as conductor Theodor Currentzis, Studio for New Music Moscow, MCME etc. and appeared in Russia and abroad in this quality.

Khrust is an author of scholarly papers on extended techniques of playing musical instruments, contemporary music notation, phenomenology of music; among them there is his Ph.D. thesis Extended Techniques of Playing Instruments: an Experience of Classification’ (adviser is Professor Tatiana Tsaregradskaya, consultant is Professor Grigory Amosov).