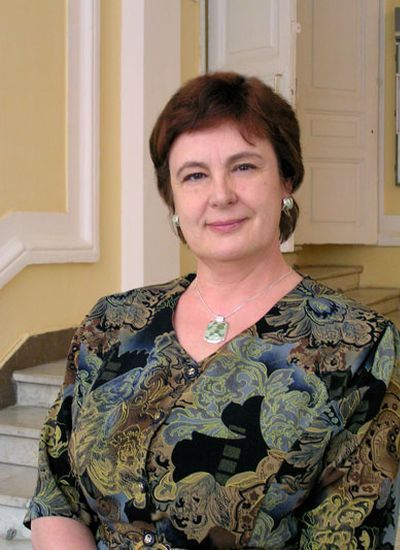 Natalia Ghilyarova was born in 1947 in Moscow.

She graduated from the Theory and Composition faculty and followed postgraduate studies at the Moscow conservatory (with A. Rudneva).

Since 1968 she worked for the Cabinet for folk music (today called the K. Kvitka Research Centre for folk music), educational and research centre, dealing with domestic folklore.

In the period of 1997-2005 she was the Dean of Musicology faculty of the Conservatory.

The basic circle of research interests of N. Ghilyarova comprises theoretical problems of modern folklore studies: interrelation of lyrics and tune in a Russian song, a phenomenon of tradition in folklore, characteristic features of Russian vocal genres, style features of Russian folk music, interethnic communication, the matters connected with the mechanism of transfer of a tradition into practice. For many years she paid much attention to work with children, seeing a revival of the best traditions of national culture through primary education as her important task.

The fund of records collected by her makes more than 28.000 samples of vocal and instrumental folklore, both of Russian and of other peoples of Russia – Tatars and Mordva.

Throughout 30 years she has been supervising the Folklore Group of the Moscow conservatory – the collective which constantly appears on stages in various cities of Russia.

Since 1974 she teaches at the Moscow conservatory, in 1996 she became professor of the History of Russian Music Department.

She gives master-classes in many cities of Russia.

She is a jury member at various competitions, chief of some grants of the Russian humanitarian scientific fund and the Russian fund for basic researches.

Editor-in-chief and compiler of sets of scientific works, author of articles in numerous editions, references to compact discs and LP’s, script writer of some telecasts on the Russian TV.

Fragment of the Concert Ah, How Those Nightingales Are Whistling!...