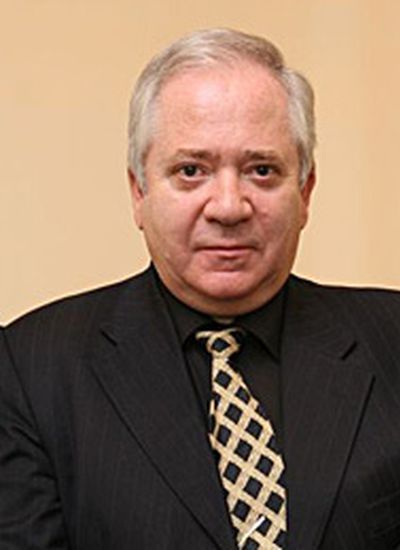 Laureate of the 5th International Van Cliburn competition in Fort Worth (USA, 1977)

In Y. Flier’s opinion, A. Mndoyants is “an exclusively gifted pianist and musician. His performing is characterized by genuine depth, highest consideration and brilliant mastering of the instrument, free from far-fetched or artificial strokes. A. Mndoyants successfully manages to play both large monumental pieces and piano miniatures. His big advantage is his high cultural level and irreproachable taste” (The Moscow Conservatory Archive).

From 1973 to 1976 he was working at the Moscow Conservatory as an accompanist.

In 1976 he entered the assistant-lectures’ course affiliated to Gnesins Pedagogical Higher Musical School (now renamed into the Russian Music Academy). He completed it in 1978 (his tutor was A. Joheles).

A. Mndoyans began teaching in 1979 at the Central Music school affiliated to the Moscow Conservatory.

He has worked as the Moscow Conservatory teacher from 1991, firstly he was professor V. Merzhanov’s assistant, in 1998 he was entitled associate professor and in 2004 a full professor.

In 2007 he became a professor at the Special Piano department under prof. M. Voskresensky.

From 2002 he has also been teaching at the Classical Maymonid Academy.

From 1989 A. Mndoyants has been participating in different seminars, he gave master-classes in Russia, in the near-abroad, as well as in Brazil, Portugal, Finland, France, Japan, Israel and in Taiwan.

Among his former students are more than 30 winners at local, national and international competitions, many of whom have become performing concert pianists. At the beginning of 1990’s A. Tchaikovsky said about him that A.Mndoyants rightfully held one of the most prominent positions in Russian piano teaching. He received a reputation of a perfectionist, and it was hard to find another one among a younger generation piano teachers who could be his peer in ability to bring up an individual talent of the youth’ (The Moscow Conservatory Archive).

To call just some graduates from his class’s: Y. Didenko, V. Egorova, D. Titerin, Y. Bogdanov, G. Ermakov, I. Koval, T. Petukhova, N. Tcherkes, A. Korshunova and many others.

He has repeatedly been invited to be a judge or the president at various international and local competitions.

The critics hailed his versatility and colorful sound layers as well as his vigorous temperament while playing the piano.

A. Mndoyants appears with the leading Russian orchestras under direction of such conductors as D. Kakhidze, V. Gergiev, F. Mansurov, V. Zhordania. They all have appreciated his professional skills as a pianist  and an ensemble player.

A. Mndoyants enjoys chamber music playing. He played together with the outstanding musicians like A. Korsakov, M. Tolpygo, I. Gavrysh, D. Sitkovetsky, V. Yarling, A. Vinnitsky, K. Rodin, Tchaikovsky Quartet, the quartet of the “Virtuosi of Moscow” orchestra.

A. Mndoyants is an artist who harmoniously combines romantic feeling and the world of a powerful composer. He has a gift of thinking in musical categories (E. Dolinskaya, doctor of art criticism. The CD annotation.)

A. Mndoyants also works as a music editor. He edited and released Concert No 3 for piano and orchestra by B. Bartok (Moscow, 1987), 24 preludes and fugues by V. Poltoratsky (Moscow, 2006).

In 1999 “The Piano” journal published his methodical work “A performer’s commentary to “The pictures from an exhibition” by M. Mussorgsky, and in 2003 his article “The Dialogues about Studying the Piano” was printed in the magazine “Lesson no Tomo” (Japan), and in 2003-2004 in the Moscow Journals “Uchitel” and “Muzikant-klassik” (No 12-1) and “The Piano” (No 1-2).

In 2006 a collection of A. Mndoyants’s articles has been published under the title “The Sketches on Studying and Playing the Piano”.

The collection recordings made for the All-Union radio company earned a high esteem of the Artistic Board. They can be often heard on the radio.

A. Mndoyants releases recordings with various labels. The national label “Melody” made two records with him in 1986 and in 1992.

He recorded the Third Concerto by S. Prokofiev with Vista Vera in 1997. In 1995 appeared his recital CD “In the Fantasy World” with the works of J. S. Bach, W. A. Mozart, F. Chopin and V. Ryabov, and in 2004 the “Classical Records” released a CD with the recording of the pianist’s recital (J. Haydn, W. A. Mozart and R. Schuman).

The recording of Borodin quintet’s together with the String quartet of the “Virtuosi of Moscow” orchestra, made in 1998, earned CHOK, the highest esteem of the popular journal “Le Monde de la Musique” (N 218, February, 1999). 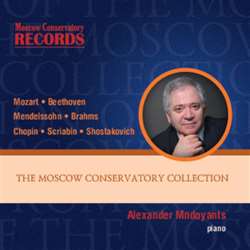