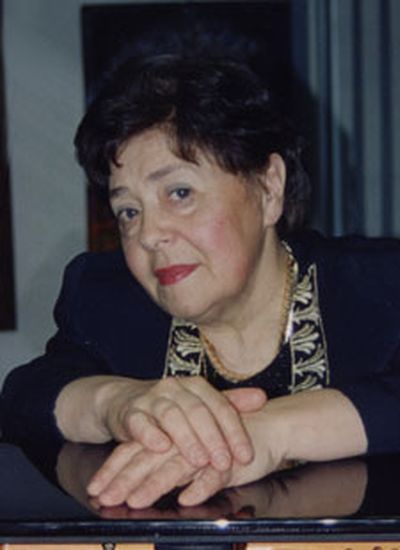 Pianist, teacher Professor Chief of the department`s commission for music theorists and composers Honored Artist of Russia (1996) Member of The International Association of Piano Duets.

In 1962 Natalia Gnoenskaya graduated with honors from the Moscow Tchaikovsky Conservatory, where she studied piano with professor Y. Zak. In 1965 she completed the postgraduate course under Y.Zak`s guidance.

In 1962 Natalia Gnoenskaya graduated with honors from the Moscow Tchaikovsky Conservatory, where she studied piano with professor Y. Zak. In 1965 she completed the postgraduate course under Y.Zak`s guidance. In 1962 N. Gnoenskaya began her performing practice, playing both as a soloist and in ensemble programs as an accompanist. «She is a gifted pianist, an intellectual and serious musician. Her performance is marked by heartiness and sincerity. She gives concerts as a soloist and as an ensemblist» (professor А. V. Sveshnikov). In 1968 N. Gnoenskaya formed with Е. Gladilina a piano duet N.Yurygina–E.Gladilina, which was considered «one of the best on the concert stage in our country» (professor М. G. Sokolov), «with its own bright, original face» (professor, PHD М. Оvchinnikov). In the reviews of the duet`s performances «artistic skill», «true fascination», «bright temperament», «magnificent feeling of style, unity of interpretation» were stressed.  From 1990 she played in a piano quartet with N. Gnoenskaya, Е. Каrpinskaya and Е. Sokolova, which was called «a new, extordinary phenomenon of the local performance» (L. Оsipova, «Sovetskaya muzyka» magazine). She took part in Russian and international festivals and in composers presentations. Her performances took place in Moscow, St.-Petersburg, Nizhny Novgorod, Chelyabinsk, Khabarovsk, Tobolsk, Riga, Vilnius, Tallinn and many other towns.

In 1961-1962 N. Gnoenskaya was teaching piano at the Moscow Choral College. Since 1965 she has been working at the cross-faculty piano department of the Moscow Conservatory. She has been entitled a professor in 2000.

N. Gnoenskaya has always had a lot of students, in her piano class she assembled such names as Y. Vorontsov, М. Кaratygina, М. Bogdanov, О. Levko, О. and G. Sedelnikovs and many others.

The recordings of the performances of the duet N.Yurygina–E.Gladilina have been made on radio and television in the period between 1972-1995.