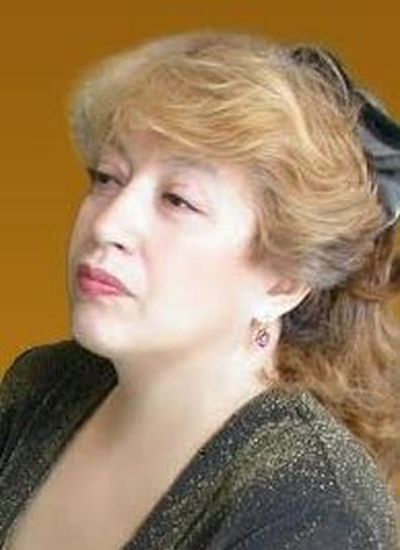 Tatiana Rubina's first teacher was her mother, a graduate of the Moscow Conservatory. At the age of seven Tatiana began her studies into the Central Music School affiliated with the Moscow Conservatory into the class of Ilya Klyachko. While she was still in first сlass, she made her debut at the Small Hall of the Conservatory with Haydn's Piano Concerto in D major. After finishing school, she enrolled into the Moscow State Conservatory as a student of Lev Nikolayevich Oborin. Her concert activities began during her years of studies at the Conservatory, when she received a first prize of the performance of Beethoven's Fourth Piano Concerto and was granted the opportunity to perform this concerto in the Grand Hall of the Conservatory. At that same period of time her meeting with Aram Ilyich Khachaturian took place, which was followed by countless performances in his monographic concerts. This marked the beginning of her fruitful cooperation with many contemporary composers. Since that time she has been a regular performer of contemporary music at the annual contemporary music festivals, «Moscow Autumn» and «Panorama of Music.»

Tatiana Rubina is a subtle accompanist and performer of chamber music. For many years she performed with soloists from the Bolshoi Theater, such as Artur Eisen and Alexander Lomonosov. Starting from the 4th International Tchaikovsky Competition in 1974, Tatiana Rubina has continuously accompanied in the cellists' competitions, performing with participants from other countries, and was awarded a diploma from the 6th International Tchaikovsky Competition. She has had the experience of countless performances in solo recitals in the concert halls of Moscow and many other cities of Russia as a soloist at the Moscow State and the Moscow Regional Philharmonic Societies, and also numerous solo recitals in many countries of the world, including Germany, France, Austria, Yugoslavia, Israel and Cyprus. The pianist's repertoire includes many solo programs comprising works by Mozart, Beethoven, Schubert, Chopin, Schumann, Liszt, Tchaikovsky, Rachmaninov and Scriabin. Tatiana Rubina successfully combines her concert activities with her teaching job at the Moscow Conservatory. Recordings of her performances on the radio are stored in libraries and archives. The «Orpheus» radio station has devoted a whole cycle of programs to the pianist and her work. She has recorded six compact-discs.

Tatiana Rubina was awarded the title of People's Artist of Russia for her concert activities.

«Tatiana Rubina is a musician endowed with a bright creative individuality, an original talent, she is one of the most remarkable Russian pianists.»

«Tatiana Rubina continues the traditions of the Russian pianistic school in a convincing manner. There has not been a single contemporary music festival at which she had not played works by composers of the near and the far abroad, and this has always been carried out on the highest level with an immersion into the very essence of the musical compositions, in a brilliant, temperamental manner and with true artistry.»

«Pianist Tatiana Rubina speaks with us in the language of romanticism with all the perfection and power inherent in them. Her freedom of tempi, richness of nuances, brilliance and virtuosity testify of her musical and technical perfection. The Etudes by Scriabin and Chopin performed as an encore sounded out as certain impulsive fireworks. It was an incredible, fantastic concert.»

«Tatiana Rubina stands along with not fully recognized giants among the pianists. She aroused rapture with the performance of her romantic concert program. Her performance is entrancing, and one can sense an immense reserve of power in it. The entire evening passed on the highest artistic level.»