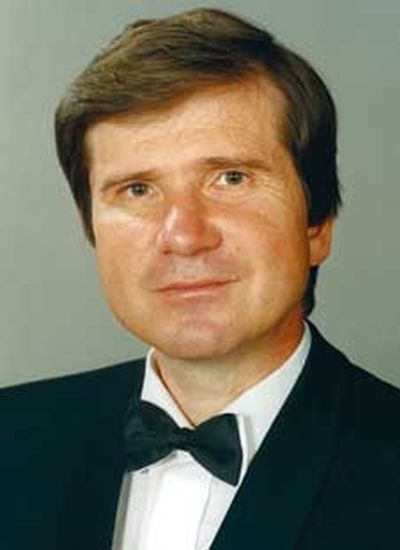 Mikhail Petukhov was born in Warne, Bulgaria. He began studying music at the age of 9 with V. Vyazovskaya. A year later he already performed in public playing his own compositions among others. In 1966 he enrolled in the Kiev music school where he studied piano with N.Naydich and composition with V. Kucherova.

In 1977 he graduated from the Moscow Conservatory, where he studied with the distinguished pianist Tatyana Nikolayeva.

When he was still a student, he wrote a plenty of works in different genres, e.g. opera “The Bride from Messina”, which is a musical setting of F. Schiller’s poem. The sonata for violin solo by M. Petukhov was acclaimed by D. Oistrach.

He has been engaged at the Moscow Conservatory in 1979 as a teacher assistant at the Special Piano department. In 1988 he received his own class. In 1993 he was entitled an associate professor, in 2007 — a full professor.

Among his former students one can  meet the laureates of International competitions, such as A. Batagov, T. Korsunskaya, T. Pikaisen, Ton Ny Nguyen Min, A. Rychkov, Y. Mazurok the younger and many others.

M. Petukhov is a jury member at the International competitions in Bulgaria, Italy, Spain and Russia.

His intense performing activity, which had already begun in his secondary school years, has for long remained unknown in the West. The international acclaim returned to him in 1988, when the Italian press called him one of the most talented performing artists of our days.

He appeared at the Moscow Conservatory, the Bolshoi Theatre, St.Petersburg, Berlin and Warsaw Philharmonic  societies, Gewandhaus in Leipzig, in the Geneva and Milan conservatories, in Usher Hall in Edinburgh, in Lieder-halle in Stuttgart, Suntory Hall in Tokio, at the Musical Academies in Budapest and Philadelphia, the National Auditoria del Madrid, in Palais de Beaux Arts in Brussels, in Theatre Erodium in Athene, Teatro Colon in Buenos Aires, etc.

Mikhail Petukhov collaborates with the major Russian  symphony and chamber orchestras, as well as with the orchestras of Argentina, Belgium, Great Britain, Hungary, Germany, Syangan, Spain, Slovenia, Croatia, Chile, Japan (and with the most celebrated conductors).

M. Petukhov’s repertoire contains a great many solo programs and more than 50 concertos for piano and orchestra, ranging from the pre-classical music to the most radical avant-garde pieces. Each author gets in his rendering a fresh touch, i.e. original and stylistically adequate interpretation.

During his life-time he gave about 2000 concerts.

M. Petukhov is a permanent participant of music festivals in Russia and abroad.

For various instruments with orchestra

For voice with accompaniment